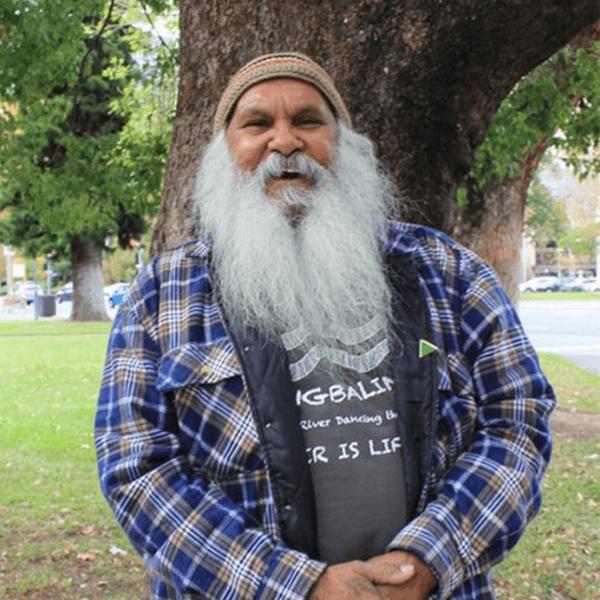 Major 'Moogy Sumner AM was born in 1948 on an Aboriginal mission station known as Point McLeay on the shore of Lake Alexandrina between the Murray River and its mouth.

Over his life Uncle Moogy has become a central figure in the fabric of contemporary South Australia, both as a representative for First nations excellence and as a defender of and ambassador for Country.

As a leader and an artist, Major Sumner’s work seamlessly connects performance, culture, people and Country.

Uncle Moogy is a world renown cultural ambassador for Ngarrindjeri arts, crafts and traditional culture, at the same time standing strong as a defender of South Australia’s environment.

In 2010 he initiated the inaugural Ringbalin Murrundi Rover Spirit project, reigniting the ceremonial fires along ancient trade routes of the Darling and Murray Rivers, which continues as an annual milestone event for nations along our greatest river system.

He has campaigned against the broken system that has allowed our rivers to be drained and the threat to the Great Australian Bight from oil and gas drilling. By educating our young people and investing in renewable energy, he says, we do what is right by our country and each other.

In 2011, Uncle Moogy crafted the first Ngarrindjeri bark canoe [Moogy’s Yuki] on Ngarrindjeri/ Boandik country in Southeast SA in over 100 years, reconnecting mob with the traditional art of canoe-building.

He was awarded an Order of Australia Medal in 2014 and the South Australian Premier’s NAIDOC Award just last year.

Throughout his public life Uncle Moogy remains a passionate advocate for the environment and the people who share it.

He lives the ideal that by looking at things from a cultural perspective, we can do more to care for people and country than we currently are.

In his own words: “Aboriginal people are very patient people. But when we see that things are being done wrong, like they are for the river, we’ve got to come together and say it’s wrong, and do something about it.”